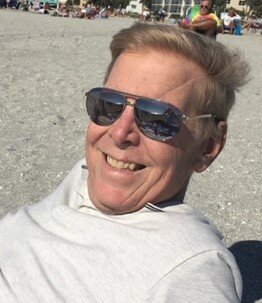 Martin J. McCue, of North Venice, FL passed away peacefully on August 29, 2022, in the care of Hospice. He was born in West Hartford, CT on May 24, 1959. He was predeceased by his loving parents Barbara and William McCue, Sr.

Marty resided in Franklin, MA until 1975, graduating from Foxborough High School in 1977.  He played baseball and basketball throughout his school years. He was accepted to and graduated from Boston University in 1981 having earned a bachelor’s degree in Journalism. Following a move to Derry, NH, he was employed by Salem High School for 26 years. During that time, he instructed more than 500 students in the art of television video production, with many of his students going on to achieve impressive careers in acting, television production and direction. Marty also created many entertaining videos which starred his beloved dog, “Max the Pug”. One of these videos became a finalist on “America’s Funniest Home Videos”, and YouTube postings of these videos garnered him over a million views. Upon his retirement from education, Marty pursued his passion for radio, and worked part time as on-air talent at WZID.

Marty met and married the love of his life, his wife Lynda, while living in New Hampshire. Avid fans of the Red Sox and Patriots they rarely missed a televised game, enjoying a home cooked meal they prepared together. After living there for 12 years, they decided to move to North Venice, FL in March of 2022, attending preseason Red Sox games, and of course many trips to the beach.

In addition to Lynda, Marty is survived by four stepchildren: Hollan and her husband Elliot, Heather and her husband Bobby, Peter, Tucker and his wife Danielle. Marty was “Grampy Coo” to six loving granddaughters, Taylan, Takoda, Scottie, Piper, Hannah and Brooke. He is also survived by his siblings and their families, Sharon McCue; Janet, Eric, Sydney and Nicholas Johnson, Patricia McCue, William McCue, Jr, Cheryl and Faith, as well as his children Matthew McCue, Kelley McCue Whall, husband Bernie and their son Jackson.

A Celebration of Life will be held privately with family and close friends. Condolences can be posted to Farley Funeral Home via the attached link. In lieu of flowers, donations can be made in Marty’s name to St. Jude’s Foundation, an organization he passionately supported.

Marty’s candle shined so brightly; its glow was extinguished much too soon. His spirit, his kindness, and his ever-present humor will be missed by so many.

To send flowers to the family or plant a tree in memory of Martin McCue, please visit Tribute Store

Share Your Memory of
Martin
Upload Your Memory View All Memories
Be the first to upload a memory!
Share A Memory
Send Flowers