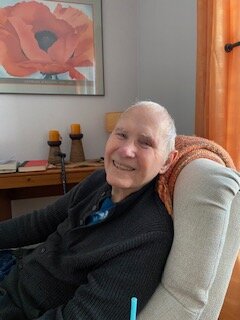 Thomas Clark Wells was born in Vermont on August 11, 1934, and passed away December 14, 2022, in Venice Florida. The family resided in Northfield, Vermont during Tom’s early years and then moved to Waterbury where he graduated from Waterbury High School, class of 1952.  Tom entered the United States Air Force in 1953 and began service in Korea.  Upon returning stateside to Tennessee, Tom married Cecile Beasley and they had 2 children    During 21 years of military service, he began as an aircraft mechanic and progressed to Master Sergeant, at Superintendent level. His many years in the south Pacific and Vietnam caused him to speculate that he was on every Vietnam base cut out of the jungles during this era.  The Military took a toll on his home life and his first marriage ended in divorce. Upon retiring he was finally able to complete college majoring in accounting. Returning “home” to Vermont he was employed by Salvador and Babic, where he met his wife, Barbara, and they were married in 1986.   Tom worked for Washington Central Supervisory Union School District as the Business Manager.  In 1989 the couple relocated to San Luis Obispo, CA and Tom was employed by San Luis Medical Clinic as Business Manager. In 1999 the couple both retired and moved to Sun City Grand, Surprise, AZ.  They relocated for 8 years to Quail Creek Community in Sahuarita where Tom hiked several times a week in Madera Canyon and delighted in the challenge and the views.  In 2019 the couple moved to the Florida gulf coast where Tom continued to struggle with heart disease attributed to agent orange exposure in Vietnam. Tom leaves his wife, Barbara, and son, Brent (wife Jeanne) of Dallas Texas. He was preceded in death by his daughter Cheryl Frederick Delph of Tennessee in November. He leaves 5 beautiful grandchildren: Lee Frederick (wife: Elysha) and Chris Frederick (wife: Samantha) in Tennessee, and Brittany Johann (husband: Michael) and Mari Wells, and Carlee Wells in Texas. He was greatly honored by the arrival of 4 great grandchildren: Harrison and Henry Frederick, and Cece and Caden Johann. His beloved younger sister, Marolyn Wells (husband: Richard Genirberg) also survive.  Additionally, he leaves 2 stepsons: Dave Williams and Jeff Williams (wife: Kristen and 2 grandchildren). No memorial services are planned. Burial will be in the Vermont National Cemetery in Randolph Vermont – on a lovely hillside overlooking the Green Mountains.  Remembrances may be made by hiking a mountain to enjoy the view or by making a contribution to Camp Abnaki, (%Greater Burlington WMCA, 266 College Street, Burlington, VT, 05401), or Tidewell (Hospice) Foundation, 3550 South Tamiami Trail, Sarasota, FL 34239. Farley Funeral Home in Venice is handling the arrangements. A message of condolence may be sent by visiting www.farleyfuneralhome.com.

To send flowers to the family or plant a tree in memory of Thomas Wells, please visit Tribute Store