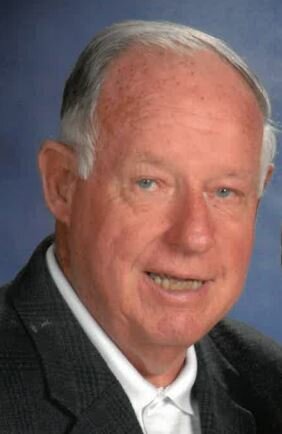 Norris L. Mead was born on December 20, 1933 in Grand Rapids, MI to the parents, Helen A. Mead and Maurice L. Mead. He graduated from Union High School in GR in 1951 and then enlisted in the US Navy. Following his Navy service, he enrolled at Western Michigan University in Kalamazoo, MI. He was a member of Alpha Kappa Psi and graduated with a BBA in 1958. While at Western he met and married his wife {Helen} Jean Morris in Kanley Chapel on campus.

Norris was employed by Brunswick Corporation, in Kalamazoo, Chicago area, and finally Muskegon, MI. After 38 years, he retired and then went on to volunteer for 20 years at United Way of the Lakeshore before relocating to Venice, FL. While at United Way he volunteered for March of Dimes and chaired many “Day of Caring” projects. He also was an active Band Aide for the West Michigan Concert Winds.

Norris loved spending time with his family, living on the lake, traveling and golf, plus various church volunteer activities at Central UMC in Muskegon, and Men’s Group at former VNUMC of Nokomis and Grace UMC of Venice, FL.

Preceding him in death were his parents, Helen and Maurice Mead, sister and brother-in-law, Joan and Donald Peterson, grandson Danny Collins, and son in law, John Collins.

A Celebration of Life will be held at a later date.

To send flowers to the family or plant a tree in memory of Norris Mead , please visit Tribute Store

Share Your Memory of
Norris
Upload Your Memory View All Memories
Be the first to upload a memory!
Share A Memory
Send Flowers