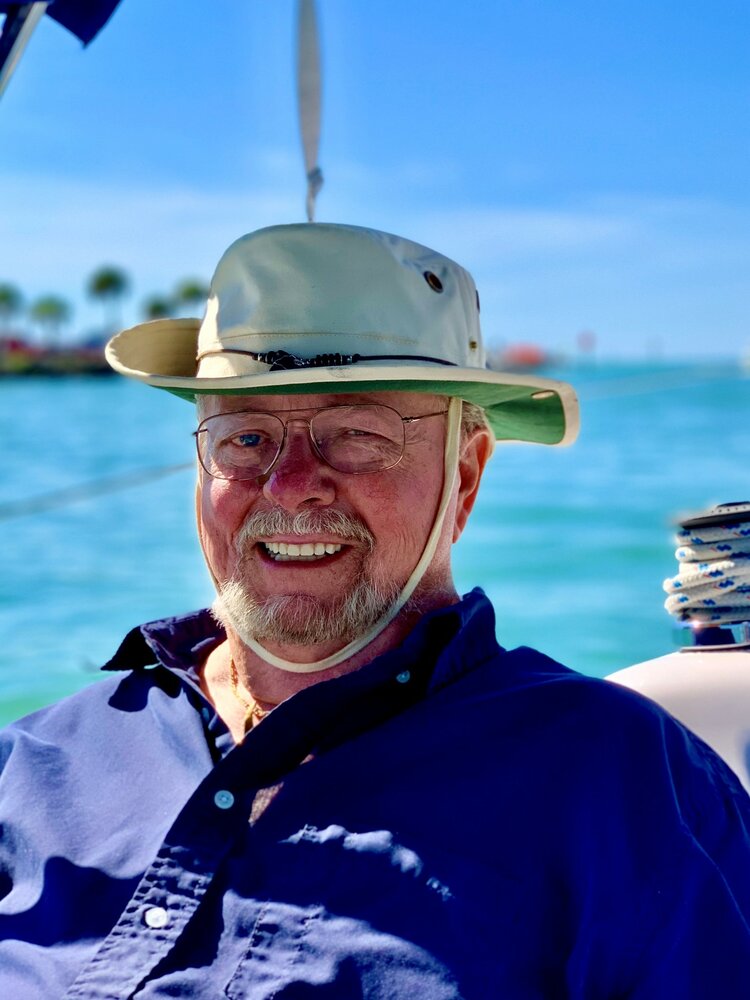 Richard Raymond Sensenbrenner, 79, left this world on Monday, April 25, 2022. He passed away of natural causes.

Born September 4, 1942, in Wisconsin. As a child, he was known for a tremendous love of nature and wildlife, owning a variety of animals, including dogs, cats, lizards, rabbits, ducks, turtles, snakes, and even a pet alligator named “Roaming Albert.”

A graduate of the Layton School of Art and Marquette University (BFA), Richard initially worked as an artist/designer and evolved to creative management positions in sales promotion and consumer packaging – later founding Sensenbrenner Design Associates, an award-winning advertising and packaging firm with clients throughout the midwest.

While in Wisconsin, he developed a passion for sailing, first on Triton, and later, his pride and joy, a 34-foot Hunter sailboat Seagull, named after the title character of the Richard Bach novel, Jonathan Livingston Seagull. Sailing granted Richard many adventures, including extended trips across Lake Winnebago and around the Door County region of Lake Michigan. He regularly raced his boat, including a first-place finish winning the Neenah-Nodaway Yacht Club’s Trans-Winnebago Cup.

Richard opened a new chapter in his life when he moved to Englewood, Florida, and gained recognition as a leading artist in the community. His favorite medium was acrylic paintings of tropical inspiration, although he also explored whimsy with “critter rocks” decorated with unique caricatures. His work often showcased Southwest Florida and the Keys.

He says, “I love nature and the simpler side of things. I have an interest in what was, am drawn to the exotic, and, like so many others, am searching for paradise. I haven’t found it yet, but tropical South Florida and the islands certainly seem en route. I suppose that art is, among other things, my way of saying I am here – and this is how I see things.”

Richard was predeceased by his parents, Raymond and Margaret, and grandchildren Jason and Tyler. He leaves behind his brother, James, sister, MaryJo, children, Richard and his wife Lori, Jeffrey and his wife Christina, Scott and his wife Ann, Kevin and his wife Crystal, and Jill, as well as grandchildren Aaron, Brooklyn, Hudson, Kaitlin, Kelsey, Nolan, Payton, Presley, Ryan, Sarah, Zachary, great-grandchildren, Brianna, Matthew, William, and a bird named Nacho.

A memorial service will be held at St. Raphael Catholic Church in Englewood, FL, on Monday, May 2. Instead of flowers, donations may be directed to Mote Marine Laboratory & Aquarium.

To send flowers to the family or plant a tree in memory of Richard Sensenbrenner, please visit Tribute Store
Monday
2
May