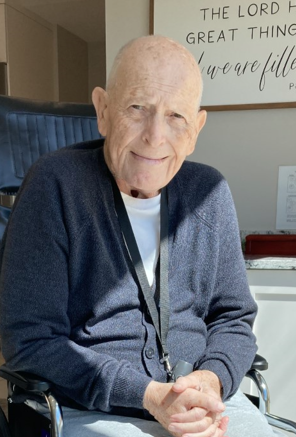 Clement Wood Bethel died on April 18, 2022 after a long illness in Venice, Florida. Born in Providence on December 24, 1935, to Lewis Harold Bethel and Gladys Mellor Bethel, Clem was a proud Rhode Islander and lived most of his life in Pawtucket, Cumberland or North Attleborough, MA. His childhood summers were spent on Prudence Island in Narragansett Bay where friendships beginning there lasted his entire life. A graduate of Tolman High School, Clem earned his Bachelor’s degree in Business Administration at Bryant (College) University. At the time of his retirement, he was Vice President for Accounting at the former Valley Gas Company in Cumberland.

Active all his working life as a Lions Club member, Clem was a communicant at Good Shepherd Episcopal Church in Pawtucket, where he sang in the choir and served on the Vestry. He was also a member of the parish’s Twosome Club whose members have met regularly for over fifty years. When not working, Clem could be found on the golf course. Golfing was his passion and he belonged to leagues in Rhode Island, Massachusetts and Florida. He was also an accomplished bowler and belonged to groups both in Pawtucket and North Attleborough and Florida.

He was preceded in death by his parents and older brother, Lewis, Jr., and by his spouse, Diana C. Simmons Bethel. He is survived by his wife of recent years, the Rev. Judith Sims Roberts, his daughter, Lynn Ann Bethel Short (James), grandchildren, Adriana B. Shipman (Joseph), and Kolin Lewis Perry, all of Reno, Nevada, and his niece, Sharilene Bethel-Jackson of San Francisco, California.

In lieu of flowers, memorials may be made in Clem’s memory to the Activities Fund at Village on the Isle’s Health Center, Venice, Florida; or St. Mark’s Episcopal Church, Youth Mission Fund, Venice, Florida; or Good Shepherd Episcopal Church, Pawtucket, RI, or to the Oral Cancer Foundation; or to the charity of your choice. Farley Funeral Home in Venice is handling the arrangements.  A message of condolence may be sent by visiting www.farleyfuneralhome.com.

To send flowers to the family or plant a tree in memory of Clement Bethel, please visit Tribute Store
Tuesday
26
April

Share Your Memory of
Clement
Upload Your Memory View All Memories
Be the first to upload a memory!
Share A Memory
Send Flowers