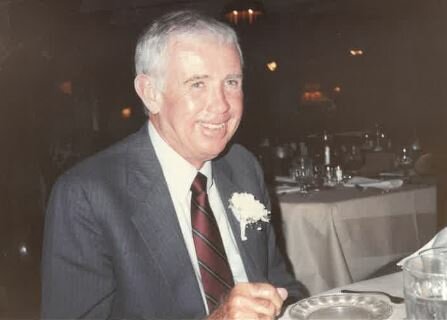 He was born on October 29, 1926 in EastOrange, NJ to the late Lyndon Travis Abbot and Dorothy Scriggins Abbot. Lyndon, or more commonly known as “Lyn,” attended East Orange High School, where he was a star basketball player who led his team to the 1944 State Championship of New Jersey.

In January 1945, he was drafted out of high school into the U.S. Army and served until the end of World War II. He also served during the Korean War, earning the rank of 2nd Lieutenant in the Military Police. After completing his service, Lyn earned his GED and then went on to attended Seton Hall University. While in college, he was player/coach of the Men’s Tennis Team and was a finalist in the ECAC conference.
Lyndon worked for Travelers Insurance Company until his retirement in 1985 as the regional manager of the personal lines department. An avid tennis player who competed into his 90s, Lyndon was a member of the East Orange Tennis Club in his youth and then became a 30 year member of the Courtside Tennis Club in Venice, Florida. He was nationally ranked (#4 in the country) in Doubles competition in both the 65 & Over & 70 and Over age brackets. He earned a Bronze Ball from the USTA in Doubles at the Army-Navy Club in Washington D.C.

In addition to his parents, Lyndon was preceded in death by his sister, Gale Abbot; his first wife, Bette Lois Johnson Abbot; his second wife, Eleanor Jacqueline Weiss Abbot; his son, Lyndon Travis III and his grandson, Brian Jennings.

At the request of the family, services will be private.

To send flowers to the family or plant a tree in memory of Lyndon Abbot, Jr., please visit Tribute Store

Share Your Memory of
Lyndon
Upload Your Memory View All Memories
Be the first to upload a memory!
Share A Memory
Send Flowers