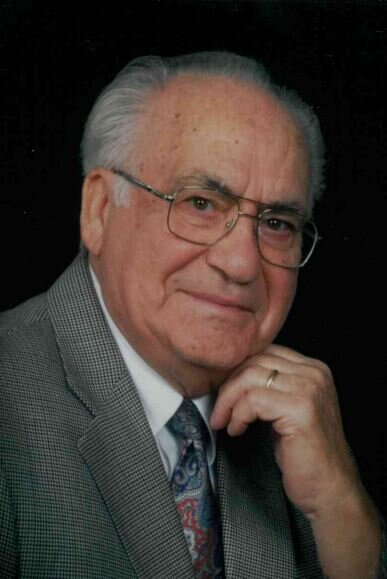 Rev. Vincent Castagna lived a full and family-oriented life. He was 89, of North Port, FL and passed away on December 28, 2022. Aside from the fact that he was an ordained minister for many years and a Supervisor of Production Engineering for Norden Systems/UTC for 20 years, having been presented with numerous Presidential Awards over the years, he was a true family man. He loved his wife Angela and his sons, John and Vincent, dearly and Susan, Vin’s wife, who was like a daughter to him. As his sons grew, they had fun fishing together. He also loved taking things apart and fixing them and there wasn’t anything that he couldn’t build or repair.

Disregarding the miles between them, Vincent was very close to his sister, Ann and brothers Simon and Carl and their extended families. Phoning often, if a visit was not possible, he asked about the well-being of each niece and nephew. And later, when it became impossible to visit, the family members physically came to him and used the modern technology, i.e., Zoom, Facebook, iPad, etc. to communicate with them. He kept in touch with family in Italy, specifically, a cousin named Paolo (Paul) reconnecting with him in his native land.

One of his favorite pastimes in his early years was building model airplanes to fly. Vincent also had a love for cooking! He cooked every evening, and most were gourmet meals. A man who took great pride in what he did, even the things he greatly enjoyed. As he neared retirement age, he began writing and wrote two books. The books are titled: The Apocalypse, A Study on the Book of Revelation which is registered with the Library of Congress and Genesis, A Study of the Book of Beginnings.

During the time of his first marriage, Vincent and Angela, his wife of 48 years, ministered to the people of the Italian Christian Church for close to 30 years. Needless to say, they were loved for their teaching, their counsel and for their hospitality both at church and in their home. In fact, one of their congregants said lovingly that the Castagnas’ were like “part of our family.” Wherever they were, in Orlando, FL, Erie, Pennsylvania or in Bridgeport, CT, their ministry was God’s blessing to all those who attended. They travelled together on most of his business trips to numerous states to make their time together a mini vacation to enjoy. They also loved to travel the cruise lines to the Caribbean Islands, Alaska and other destinations.

One of the highlights of their lives was their yearly excursion to Port Jefferson with all five of their grandchildren: Kristal, Lauren, Mychele, John and Thomas! It was always an exciting and memorable day trip for everyone! After all, the children had their grandparents all to themselves from morning till night! A cornucopia of delights,

like shopping in all the stores before boarding the Ferry to find something special to bring home; stopping for ice cream; riding the Ferry then back on the train to the car -plus so much more! A treasure-chest of memories of a grandfather and grandmother who loved them… and expressed that love to them by being with them and having fun.

Many years later, Vincent married Carol. They were married for just under 18 years. She married a man of God whose kindness touched her heart and enhanced her life. Even though her daughters were in their 30’s at the time, Paige and Jill found in Vincent, the dad who stepped in and shared his great qualities of kindness, understanding, respect, caring, communication, warmth, genuineness, his smile and

laughter. They knew also that they could come to him with any question about the Bible and he always had a ready response.

Vincent and Carol had the opportunity to minister to the men and women at the Discovery Commons Assisted Living Facility, formerly known as The Springs, in North Port Florida. They began this ministry three years ago and he preached the Word of God every Sunday and Carol played the Piano Prelude and accompanied the congregation as they sang hymns before the service. He preached as long as he could until recently when he asked Pastor Anthony King to continue this endearing and important ministry. Also, about three years ago, Vincent began a “Men’s Breakfast” group every other Saturday at a local restaurant. The group grew from about 3 men to 20 men who attended regularly to enjoy each other’s company, to sustain the camaraderie. They shared a few Bible verses, prayed or gave testimony if they wished to do so. Vincent asked Randy Rudy to step in and lead this group so it would continue to thrive.

One of his doctors commented, “What a gift he is to the world!” Carol said, “I thank God that I met Vincent in the autumn of my years. He truly was one of the great men of our time. Words cannot express how greatly he will be missed."

To send flowers to the family or plant a tree in memory of Vincent Castagna, please visit Tribute Store

Share Your Memory of
Vincent
Upload Your Memory View All Memories
Be the first to upload a memory!
Share A Memory
Send Flowers