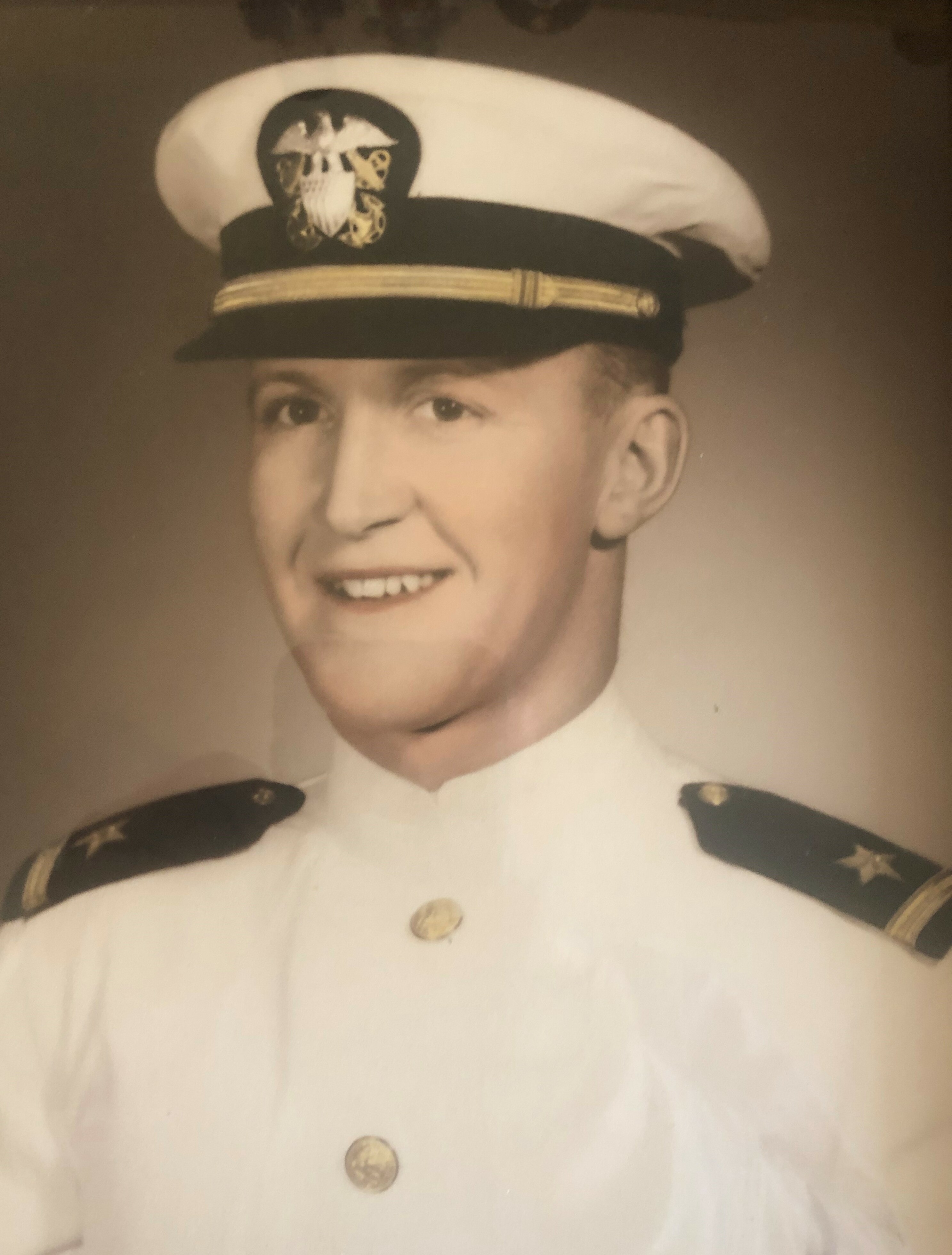 Conrad “Connie” Ernest Rousseau, Jr. died peacefully in his own bed the morning of December 15, 2022, hugged by his wife of 62 years, Judy. Connie was born February 24th, 1937, in Newburyport, MA, the son of Conrad Ernest Rousseau, Sr. and Madeline Hardy. He lived in Southbridge, MA before moving to Amesbury, MA where his father owned a Western Auto store. In 1954 he graduated from Amesbury High where he was the recipient of the Bausch and Lomb Honorary Science award, graduation speaker, and track star. He graduated from UMass Amherst in 1959. The next year he graduated from Officer’s Candidate School in Newport, RI, and was commissioned an Ensign in the US Navy. He married Judy (nee Heaney) in June 1960 and spent three years at the navy base at Pensacola, FL as navigator on the USS Antietam.

They returned to Massachusetts and eventually settled in Marblehead, MA and raised three sons. Conrad graduated from Suffolk Law School in 1968 and began a career as a corporate lawyer, first at New England Life in Boston, MA, next at Bankers National Life in Parsippany, NJ, and finishing at ITT Financial in St. Louis, MO. He retired early at age 58 and moved to Venice Golf and Country Club to enjoy golf, tennis, and bridge.

Connie and Judy also loved to travel, exploring Europe on multiple occasions, especially France where Connie could practice his French, which he strived to perfect throughout his long life. They also traveled to Central America, Japan, Mexico, and Canada, at times with their sons and grandchildren. Connie looked forward to the visits from his family, especially for “The Tradition”, the annual member-guest when Terry and Donnie would come down and play with him in alternate years. An accomplished golfer, he scored 6 holes- in- one during his golfing career.

Connie will be missed by all for his lifelong principles of fair play, hard work, and loyalty to family and friends, plus his daily runs throughout the community.  But he would have said his greatest joy came from his love and devotion to Judy, his wife. Besides his wife, Connie will be missed by his three sons of whom he was deeply proud: Conrad “Terry” Ernest Rousseau III (Cheryl), Donald Heaney Rousseau (Taj), and Bryant William Rousseau; grandchildren Elena Rousseau Page (Jason), Conrad Ernest Rousseau, IV, and T. Jagues Tillah Rousseau; and his brother Robert Rousseau.

Connie was preceded in death by his parents and younger brother Gerald Oliver Rousseau.

A visitation is planned for Friday morning, January 6th,2023 at 10 am with a memorial service to follow at Farley Funeral Home, Venice. A reception will be held at noon at The Venice Golf and Country Club. The family requests that in lieu of flowers please consider a contribution to Tidewell Hospice, Sarasota, FL

To send flowers to the family or plant a tree in memory of Conrad Rousseau Jr. , please visit Tribute Store
Friday
6
January

Share Your Memory of
Conrad
Upload Your Memory View All Memories
Be the first to upload a memory!
Share A Memory
Send Flowers