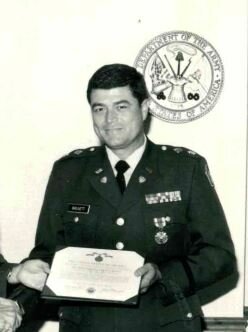 Colonel Richard Stanton Bassett, Retired U.S. Army, a 26-year veteran passed away on November 7, 2022, with his wife Cynthia and daughter Debra by his side.

Rick was born October 10, 1944, in New Rochelle NY to Horace J. Bassett and Mary Margaret McPhee Bassett. He attended New Mamaroneck High School class of 1963 was inducted into the school’s baseball Hall of Fame. After high school he received his master’s degree from the University of Miami where he served in the ROTC Program, was a two-term treasurer for Kappa Sigma and won the prestigious “Man of the Year” award in 1967.

He is survived by his wife Cynthia Portch Bassett, sons Richard (Michelle) Bassett of Spring TX, Robert (Nicole) Bassett of Magnolia TX, daughter Debra (Rick) Alford of Panama City Beach FL and son Franklin Thompson of New Market VA, as well as five grandchildren and six great grandchildren, sister Linda Castagna of North Port FL, brothers James Bassett of Madison GA and Bobby Bassett of Naples FL, along with many nieces and nephews.  A special mention to his nephew Gil (Madelyn) Castagna of Rye NY and deputy daughter Lisa Ross of Odenton MD for their support. Rick was preceded in death by his parents.

A Mass will be held at San Pedro’s Catholic Church in North Port on January 14, 2023 at 10:30am.  Interment will be at Arlington National Cemetery on a date TBA.

In lieu of flowers the family asks that you consider a dontaiton in Richard's honor to either the Wounded Warrior Project or North Port Fire Rescue, 4980 City Center Boulevard, North Port, FL 34286,.

To send flowers to the family or plant a tree in memory of Richard Bassett, please visit Tribute Store
Saturday
14
January