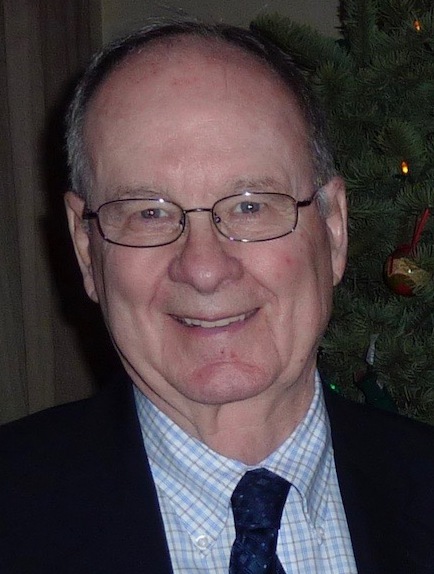 John Thomas Wilkin, Age 90, of Nokomis, Florida, formerly of St. Louis, Missouri, passed away peacefully, surrounded by his family, on October 9th, 4 days before his 91st birthday after struggling with a long illness. Born in 1931 in Ames, Iowa to Albert and Maude Wilkin, John is survived by his wife Shirley, his sons Scott (Amy) and Matt, and his grandchildren Mackenzie, Jack, and Madeline.

John and Shirley met in St. Louis on a blind date arranged through their roommates. They supported each other through many of life’s challenges and were the best of friends. Happily married for 61 wonderful years, they raised Scott and Matt in St. Louis and later moved to Florida.

John grew up in Ames, Iowa, and attended Iowa State University where he graduated in 1953 with a degree in Agronomy. At University, he was an accomplished track and field athlete and competed in the pole vault and high-jump events. John was the team’s captain and achieved many distinctions in the pole vault. Several of his accomplishments included – the Athlete of the Week at Iowa State, all-conference status, and several outstanding Big-Eight conference titles. One of John’s most notable achievements was a 3rd place finish at the Texas Relays where he competed against the 1952 Olympic gold medallist, Bob Richards.

After college, John entered the United States Air Force as a First Lieutenant and served as an intelligence officer under the command of the Third Air Division stationed in Guam. He served for two years and primarily worked on decoding classified communications in the Asia Pacific region following the conclusion of the Korean War. Upon discharge, John earned a special letter of commendation from top military brass for his leadership and service. John would stay active as a Captain in the Air Force Reserve for 10 years and often shared his military stories and pictures with his family.

Following his tour of duty in Guam, John returned to Iowa State where he pursued his interest in economics and statistics, earning a master’s degree in economics in 1958. After graduation, he moved to St. Louis where he began his 54-year career working for Doane, ultimately leading the company’s Agricultural Market Research Division as Vice President. John also is credited with designing and creating Doane’s proprietary panel of 25,000 farmers that powers much of the company’s statistical survey work. John was highly respected in the Ag market research industry. He had the distinction of being asked to testify to a congressional panel by the United States Environmental Protection Agency on pesticide usage. He received a commendation for his service from the US Department of Agriculture, upon his retirement in 2011 at 80 years old.

In 2013, John, Shirley, and Matt moved to Nokomis, Florida where they enjoyed nearly 10 years of carefree retirement. Birdwatching, reading WWII biographies and watching old movies filled John’s days, and he loved driving to the pier each evening with Shirley and Matt to watch the beautiful sunsets. He took great pride in his family and all of their academic achievements. He particularly enjoyed watching his grandchildren’s sporting events and artistic performances. We will all miss his heartfelt and touching toasts and blessings before each meal at our family gatherings and holidays.

A memorial service will be announced at a later date.

Share Your Memory of
John
Upload Your Memory View All Memories
Be the first to upload a memory!
Share A Memory