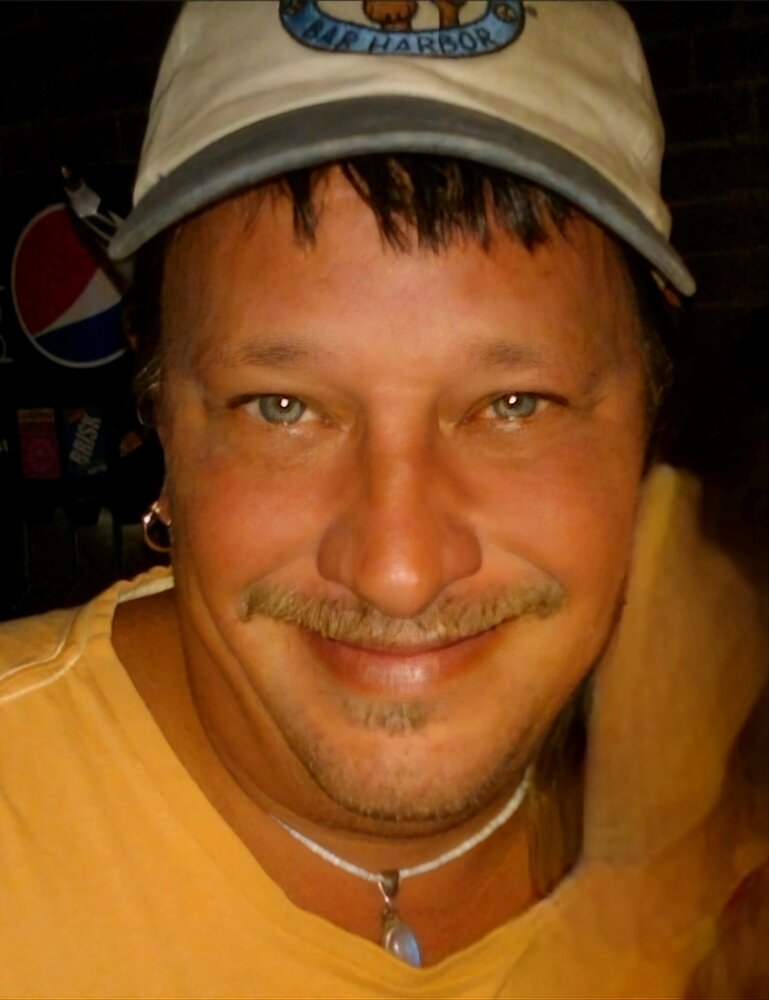 Billy Nelson 53 of North Port, FL., passed away June 24, 2022, as he landed at hospice, after “The Great Escape” from the hospital. He was admitted less than a week prior to his passing, and the hospital was a beautiful and loving place; he just didn’t want his last breath to be in that room. He found out earlier this year, that cancer had been consuming his body for about 5 years; he unfortunately lost that battle.

He was born in Camden, Maine on July 10th 1968, the gorgeous son of Joyce Nelson (now Batz). Billy grew up as Billy Joe, and then “grew” beyond this, and became Billy, and eventually also lovingly known as Princess.

This is written for Billy, written by his sister who absolutely adores him; it is HIS story, but there is no way for me to tell his story, without telling you about the people whose life he affected most, and I was merely one of many. Billy was unique and would NOT want a run of the mill “obituary”, so here is my attempt at giving him what I think he would want.

Let’s start with the history: Billy jumped out of our Mom with a heart of gold and work ethic like none other. As a young boy living on West Meadow Rd, he would find yard work with our neighbors, just to walk down the crazy steep hill to Deans Flower Shop and back, with flowers for our Mom. Seriously, like I stood a chance. He was amazing from the start and this is not an exaggeration. He attended schools in Rockland, then on to St. George Elementary School, and then High School at Georges Valley.

He spent his teen years on Long Cove Rd, and some of his first jobs were working at the East Wind Inn and the Great Eastern Mussel Farm. There are a few things he is known for, but being a dedicated hard worker is at the very top of that list. He has worked many places, but some of the more notable ones once leaving Maine, and moving to Florida were (for various reasons) The El Adobe for around 15 years, The Ritz, Sharky’s On The Pier (Venice), and at the end he had been at Woody’s River Roo. No matter where he worked, his co-workers adored and/or appreciated him, and he treated his work family, as family.

Family & Friends: AND I APPOLIGIZE IN ADVANCE IF I MISSED YOU, there is so much in his Florida life that I don’t know, off the top of my head … but here goes …

Billy was predeceased by his Aunt Dorice Austin. He is survived by his mother Joyce Batz and her husband Larry of Belleview Florida; his sister Vicki Fales of Rockland, his brother James McClure of Rockland; nieces and nephews Christopher Heald, Jeffrey Heald, Samantha Ames, Jasmine McClure, and Madison McClure; Aunts and Uncles, Helen Leonard and her partner of Larry of Waldoboro, Lillian Hannan of Palermo, Ralph “Buzzy” Nelson and his wife Kelley of Camden, Gloria Nelson and her partner John of Winterport, and Ron Nelson and his partner Joanne of Cushing.

Everyone who ever cared about Billy, will want to give a little extra Thanks to Tom & Kisha Biche of North Port FL. They took Billy in when he suddenly couldn’t work and thus wouldn’t have money for rent. Not only did they ask for nothing from Billy to do this for him, but they both took him back and forth to doctor’s appointments and dealt with all of the many things required once someone finds out they are loaded with Cancer. We cannot Thank you two enough.

He also had a few other friends that I need to mention, these people also did what ever they could for Billy, even if distance meant it was only supporting his spirit … Lorna “Cookie” Mank of Maine; Valerie Plesser of Kentucky; Lynne McLeod of Florida; and Jennifer Bordner of Florida.

Billy AKA “Princess” was one of the strongest people I have ever known, but also one of the most delicate people I have ever known. In case you were wondering, I say both of those with such admiration. Billy was my favorite human, anyone who ever known me knew this fact. He was tough as nails when needed, especially when protecting others, but also such a sensitive and loving person which is so needed in today’s world. Having said that, it’s hard to be so sensitive without feeling the sharp pains of humanity; and sometimes showing our “human-side” manifests in extreme ways like becoming a princess, a bitchy diva, or throwing yourself under a bus to prevent other people from feeling the pains that you have felt. Billy had and did all of that. Most people loved him for all of it; loved him for every side of who he was.

He had a very unique way of being who he was/ wanted to be / or to be as close to what he wanted to be, as he could. Billy could be a wicked serious DIVA; and diva’s can be … well something to contend with. Through the years, that mindset became a core part of who Billy was. He was definitely something to contend with when he was in a mood; but he was NEVER mean. NEVER. He had a heart of gold that was bitchy sometimes, but even then, he would give you his only bite of food if he thought you needed it more.

Truth be told, I was one of his favorite people too, and sometimes he could be such a … let’s use the word DIVA, to his favorite people, that it dominated the “mood”; but I wouldn’t change a thing about him and I don’t think any of the others would either. I’m not saying that because he is no longer here with us; he needs to be remembered for who he was, not who we want people to think he was. He was often difficult, but he was ALWAYS putting other people’s needs first. Billy cared about everyone, and many cared about him … but the people who loved him, saw all sides of him and knew that love was his driving force in his life. And if you were loved by Billy, you were loved fiercely.

Now I have to state two hard facts to feel, let alone share. If you are sensitive … STOP READING NOW.

1. Billy wasn’t honest with his loved ones. OUCH.

2. Billy wasn’t honest with himself either. UGGHH.

The reason I shared those two facts is this: Self-love is more rare than you all think. It is my belief, that Billy assumed that his poor life choices with alcohol, cigarettes and bad food options were to blame for how crappy he had felt, for too many years. I am sure that he was not wrong in some ways. Having said that, he ignored all of the WARNING signs. When Billy was finally forced to go seek medical attention, he eventually found out that Cancer had been growing and consuming his entire body for at least 5 years. Trust me when I tell you, that he was too busy loving and taking care of so many other people that he cared about, that just made excuses for how he was feeling, and didn’t “love himself” enough to get a diagnosis earlier, so he could make a real difference.

Self-love wasn’t there (the UGGHH). Some would say that that’s on him and if he didn’t care about him, that who are we to judge. I can’t argue that reasoning … but think about all of the people that Billy supported in so many ways, that now don’t have their Billy.

Then I will share my selfish feelings (the OUCH) … by not being honest with his loved ones … so many missed out on getting to say good-bye, getting to share with him epic stories of things they experienced together, or even getting one last hug. My opinion … your loved ones deserve to hug you one last time. But in Billy’s famous words … “It is what it is” … and I GET IT BUBBIE!!!!

Please be more like Billy. Love others with your whole heart, treat them with kindness and I promise you, if you aren’t feeling complete, this is The Key. You need less stuff in life when your heart is consumed by love. The more love you give, the more complete your life will be.

And in closing, please, please, please, don’t wait until it’s too late for self-love through self-care. Listen to your body, and give it the attention it needs, so you may have a fighting chance for whatever battle may be thrown at you. You are loved and you have people counting on you.

Billy was an imperfect human with the biggest heart which made him practically perfect, and actually perfect to those he loved fiercely.

Thank you to the Doctors at the Florida Cancer Specialists in Englewood, to the ICU at Sarasota Memorial Hospital in Venice for the remarkable care they gave to Billy during his last days, with Special Thanks to Holly, to Farley Funeral Home and Crematory in Venice for respectfully handling Billy’s arrangements after his passing, and to Burpee Carpenter & Hutchins Funeral Home for assisting with his ashes once we got him back to Maine.

A celebration of Billy’s life will be held on July 17, 2022 from 3-7 PM, at “Billy’s Favorite Bar”, The Waterworks Restaurant in Rockland, Maine. In lieu of sending flowers, please plant beautiful perennial flowers everywhere, so that this honor of Billy’s love for gardens can be enjoyed for years to come.

To send flowers to the family or plant a tree in memory of Billy Nelson, please visit Tribute Store

Share Your Memory of
Billy
Upload Your Memory View All Memories
Be the first to upload a memory!
Share A Memory
Send Flowers