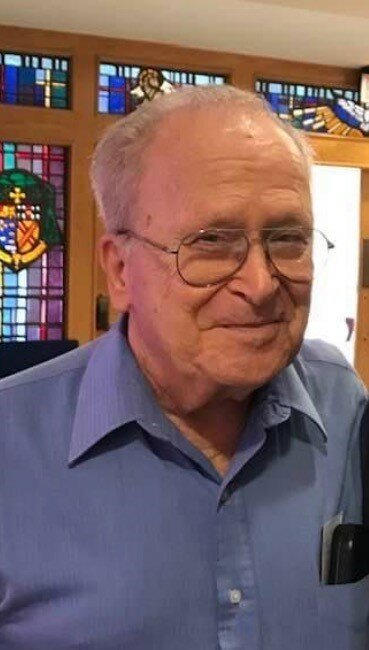 VENICE, FL – Robert (Bob) Young, 84, died peacefully on March 16, 2022, at Heartland Health Care Center in Sarasota, FL. He was born September 9, 1937, in Philadelphia, the son of Robert A. and Catherine (Kelly) Young. Bob was a proud member of the U.S. Air Force, having served in Malmstrom AFB in Montana and Thule AFB in Greenland. He was once a Grand Knight in the Knights of Columbus in Williamstown, NJ and was currently a Fourth- degree member of Council 9924 in Venice. He was an active member of Our Lady or Lourdes Parish in Venice as a lector and a Eucharistic minister. Bob worked for four decades for Uniroyal in multiple locations including Philadelphia, PA, Mishawaka, IN, Stoughton, WI and Sarasota, FL retiring in 2000. On March 21,1957 he married the love of his life, Elizabeth (Betty) Jerla. They enjoyed 65 wonderful years of marriage. Surviving are his wife, a brother Lawrence Young and his wife Anna Marie and a sister, Cass Colanino and her husband Frank. Also surviving are two sons, Robert Jr. and his wife Deborah, of Secaucus, NJ and Mark and his wife Kallie of South Bend, IN and a daughter, Kathleen Sloma and her husband Mark, of South Bend, IN. In addition are four grandchildren, Bryan, Lacie, Kristina and Sean and three greatgrandchildren, Jason, Pacey and Payden. Visitation is Tuesday March 22 at Farley Funeral Home, 265 S. Nokomis Ave., Venice from 3:00 to 6:00 PM. A funeral Mass will be held on Wednesday, March 23 at Our Lady of Lourdes Catholic Church, 1301 Center Rd. Venice at 10:00 AM. Interment with full military honors will be at Sarasota National Cemetery on Wednesday, March 30 at a time to be determined. In lieu of flowers, Bob would have wanted donations to go to National Right to Life (www.nrlc.org)

To send flowers to the family or plant a tree in memory of Robert Young, please visit Tribute Store
Tuesday
22
March

Our Lady of Lourdes