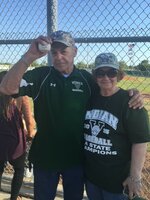 Walter Burkhardt, affectionately known as Sonny, passed away on Monday, October 31st 2022. He was born in Newark, New Jersey on August 21st 1934 to Walter and Emily Burkhardt. Sonny enlisted in the United States Air Force when he was 17 years old and served in the Korean War as a gunner on his Plane called SPOOK.  Sonny married is beautiful bride, Elizabeth on June 30th 1956 at Saint Antoninus Catholic Church in Newark New Jersey.  They built a beautiful life together in their 66 year marriage. Sonny (aka: dad & poppops) loved being able to spend any time he could with his family, golfing and watching his “boys” play baseball. Sonny was a friend to everyone, a genuine soul, the most adoring husband, and an incredible father/poppops. He will be missed in this world from his loved ones but is rejoicing in heaven with his sons. Sonny is preceded in death by his parents, his sons, Joey and Sonny Jr. Sonny is survived by his wife, Liz, daughter Donna (Tom), grandchildren, Jessica (Josh), Josh (Julia), Jake and great-grandchildren, Harper and Jackson.

A graveside service will be held at Venice Memorial Gardens on Monday, November 7, 2022 at 10 am.