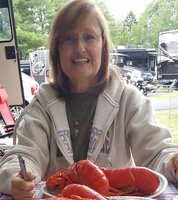 It is with heavy hearts that I announce the passing of my beloved wife of 18 years Bette Luksha-Gammell. Bette died on September 13, 2022 at her home in North Port with her husband, Larry, and little dog Nelson. It was her wishes that when her time had come to be together. A big thanks to Tidewell Hospice for helping us with that.

She was survived by her sisters Beverly, Francis and Barbara along with her brother Frank. Frances resides in Blacksheer, GA while the rest of the family in the Jacksonville, FL area.

Bette was born in Jacksonville to Frank and Beverly Luksha, which are both deceased, on October 25, 1959. At 18 years old she decided to serve her country by joining the Navy. During that physical she learned that she had Pulmonary Hypertension. Doctors felt that she may not live past 20 years old. In 1991, on the edge of death, she received a Double Lung Transplant in Pittsburg. She went on to work for Continental Airlines and later Disney Cruise Lines. In 2002 she received another single lung transplant and in 2005 a kidney transplant.

Bette had to be done working at that time so she did a lot of transplant awareness and organ donation work. She attended the William Holland Laparidary School of jewelry design in Georgia. She became a very talented artist creating jewelry of all kinds and is highly respected in that industry. She also taught classes at the Cultural Center in Port Charlotte, Fl.