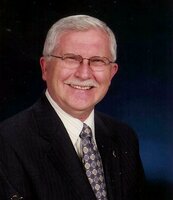 Ken served in the United States Navy from 1966 until 1970 attached to the Naval Systems Support Activity at the Washington Naval Yard in Washington, DC as a computer programmer and later aboard the USS Orion, AS18. After working a number of years for Landmark Communications in Norfolk, VA and Greensboro, NC, he attended Duke University for 4 years and served as a United Methodist Minister. Ken also founded ExecuTrain of Eastern Virginia in Virginia Beach, VA, was President and CEO of that business for twelve years and later returned to the ministry until 2009. He continued his commitment to the church as a member of the United Methodist Church.

Ken also co-authored 2 books, including a memoir, a history of Useppa Island, and 8 mystery novels written under the pen name, Charles P. Frank.

A Celebration of Life will be held at Farley Funeral Home, North Port, Florida on August 9, 2022 at 11:00 AM with Dr. F. Belton Joyner, Jr., Bahama, North Carolina and Pastor Mike Weaver, Gulf Cove United Methodist Church officiating. A short memorial service and the commitment of the body will be at the Sarasota National Cemetery, Sarasota, Florida on August 10, 2022.