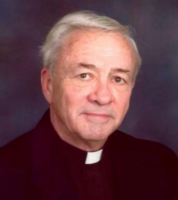 After a long illness, Reverend Edward A. Kearns, Jr. passed away on July 11, 2022, in Sarasota, Florida. He was born on February 26, 1936 in Paterson, New Jersey, to Edward A. Kearns Sr and Jean (Fuscaldo) Kearns. Father Kearns was predeceased by his sister Jane and her husband Andrew Chiappara. He is survived by his sister Ellen and her husband Kurt Akersten, 4 nieces and nephews, and 14 grand nieces and nephews. Father Kearns attended Seton Hall University and Immaculate Conception Seminary, completing his undergraduate work in 1963 and earning a Master's of Divinity, M. Div., in 1970.

He was ordained on May 25, 1963, by Bishop James Navagh in the Diocese of Paterson, New Jersey. Father Kearns served in several parishes in New Jersey including St. Christopher’s, Parsippany; Our Lady of Mount Carmel, Boonton; St. Thomas the Apostle, Oak Ridge. He was the founding pastor of St. Elizabeth Ann Seton parish, Three Bridges, New Jersey and served there from 1984 to 1997. In 1997, Father Kearns retired to Sarasota, Florida where he served as a part time associate at St. Thomas More in Sarasota.

A Mass of Christian Burial will be held at 11:00AM on Saturday, September 10, 2022 at St. Elizabeth Ann Seton Roman Catholic Church in Three Bridges, NJ.  Burial will be private at Holy Sepulchre Cemetery in Totowa, NJ.  Farley Funeral Home in Venice, Florida is handling the arrangements. A message of condolence may be sent by visiting www.farleyfuneralhome.com.