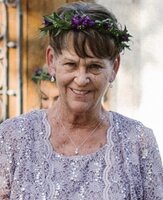 Penny fiercely loved her family and friends. Her dry wit and self-deprecating sense of humor kept everyone around her laughing until the end of her life.

Growing up the youngest of five was a dubious task but she was up for the challenge as she tortured her older siblings through a childhood of obnoxious antics. When they locked her out of the house, she thought nothing of breaking a window to enter. Penny was a force to be reckoned with and her older siblings found it easier to join her than beat her. When their mother insisted they share Kool-Aid with the neighborhood children, her older siblings assisted her in concocting a ‘special” recipe that was flavored with paprika, garlic powder, cinnamon and various other spices. The neighborhood kids never asked for Kool-Aid again.

Her true joys were family and simple pleasures. She loved rising  early and enjoying her morning coffee while watching the birds visit her feeders. In daily phone calls with her daughters, she recalled the birds that had visited that day and the new measures she had taken to deter the squirrels from pilfering her bird seed. Her strategies for scaring them including banging on the patio table with a variety of instruments and encouraging Ed to bark like a dog were far more effective at startling the neighbors than the squirrels.

Penny enjoyed a variety of home projects with her husband, Ed and they took on everything from restoring furniture to painting their entire home, inside and out. She was a consummate napper, scratch-off card consumer, and dessert eater. She was a fixture at North Port High School basketball games and was adored not just by her grandsons, but the entire Bobcat team as she was the biggest cheerleader in the stands for each and every one of the players.

She relished her role as Grandma and GP to Evan, Megan, Mitch, and Eric and took pride in teaching them to play poker and Euchre. Being a competitor, she also had no problem beating them and did so on a regular basis. Penny was delighted when Evan and his wife, Ali, brought Beckett into the world and gave her the title of Great Grandma. They will all miss her love, encouragement, and punctual birthday cards.

Deeply mourning is her adoring husband of 32 years, Ed, whom Penny provided selfless care throughout his prolonged illness, hospitalization and recuperation.

Also desperately missing her are daughters Karen and Tammy. Penny was the bedrock of their lives and a consistent and vibrant source of comfort, love and joy to them and their families. Tammy’s husband, Scott, loved Penny dearly and selflessly helped with the heavy lifting of her care until the very end.

Left with decades of fond and colorful memories are her siblings Bill, Karen, and Nancy (Bill), and sister-in-law, Jane (Jim).

Grieving, too, are stepsons, Chuck (Tammi) and John, granddaughters Payton and Victoria, sister-in-law Donna, and numerous other family members and friends.

A family celebration of life is being planned for the future. In lieu of flowers, donations can be sent in Penny’s honor to Tidewell Hospice - https://tidewellfoundation.org/donate/