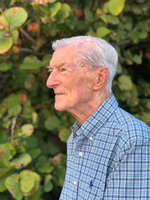 Eugene Walter Jakos, 95, of Venice, FL, peacefully passed away on Tuesday, June 28, 2022 at home surrounded by his loving family.

Born in Newark, NJ on October 15, 1926, Eugene spent his childhood years in Astoria, NY. He attended grade school at PS126 in NYC and upon graduating trade school, Eugene enlisted in the Navy. His service in the Navy included building and repairing heavy steel draglines used to block underwater missiles and learning to repair airplane engines.  After his service with the Navy, Eugene went to Trinity College in Hartford, CT. In 1949, Eugene met the love of his life, Jeanne M. Archambault, at a Trinity College & St Joseph's Women's College dance. They were married in January 1950.

They started their family while living in Astoria, NY in the same apartment building as Eugene’s parents, Frank and Caroline Jakos.  Eugene began his career with IBM in 1954 (which he jokingly said it stood for “I’ve Been Moved”). He lived in Old Bethpage, NY; Guilford, CT, and Weston, CT before retiring to Venice FL in 1985. Eugene and Jeanne enjoyed 37 wonderful memory-filled years in Florida, enjoying traveling to many US National Parks and spending time with their large family at beach gatherings.

His life is celebrated by his children: Karen (Mike); Christine (John); Edward (Margy); Theresa (Doug); and Jeanne. He was a loving "Dziadek" of ten grandchildren and an adoring Grand-Dziadek of eight great grandchildren.

Relatives and friends are respectfully invited to attend the visitation on Monday, July 11th, 2022 from 3:00-5:00 PM at the Farley Funeral Home, 265 S. Nokomis Ave, Venice, FL. A family eulogy and sharing of memories will be offered. A funeral mass will be celebrated on Tuesday, July 12th, 2022 at Our Lady of Lourdes, Center Rd, Venice, FL at 10:00 AM. Mass will be followed with a burial service with military honors at Sarasota National Cemetery beginning at 12:30pm..

In lieu of flowers, memorial contributions can be made to the Disabled American Veterans at www.dav.org/donate.